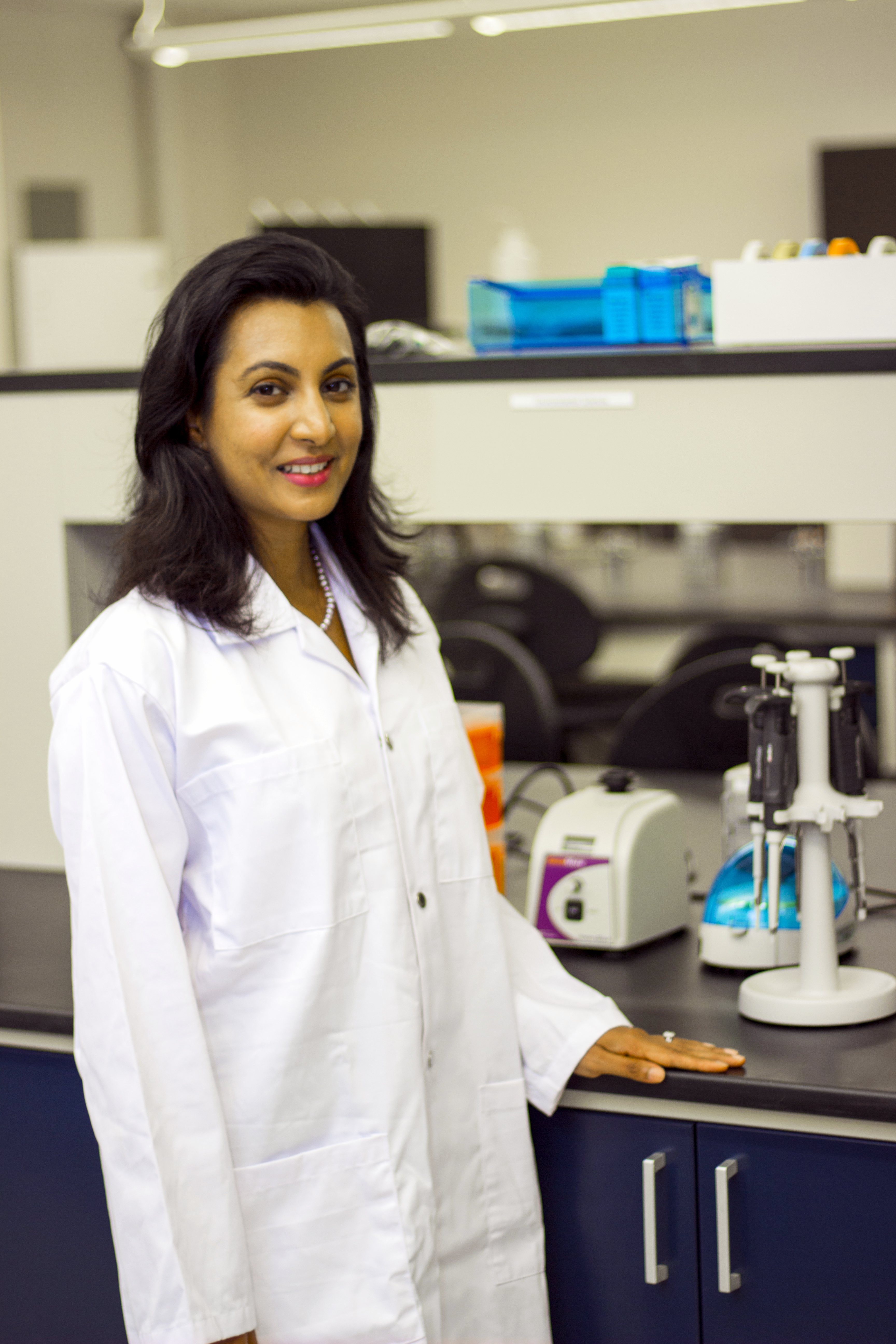 Dr. Rajini Haraksingh is a Human Geneticist and Lecturer in Biotechnology in the Dept. of Life Sciences at the University of the West Indies, St. Augustine. She credits her high school experiences representing Trinidad & Tobago at the London International Youth Science Forum and at the International Mathematics Olympiad as paramount in her development as an independent scientist with the confidence to tackle seemingly intractable problems plaguing humanity. She believes that teaching students that it is within their capabilities to solve such problems will propel our society’s creativity and innovation. Dr. Haraksingh completed two Bachelors degrees from MIT in Mathematics and Biology, a PhD from Yale, and a postdoctoral fellowship at Stanford.

She is currently a Lecturer in Biotechnology at The University of the West Indies at St. Augustine. In 2013, she was awarded the Junior Scientist Award for Excellence in Science and Technology from NIHERST for her research on human genomic variation. Her professional aspirations are to be a leading researcher, educator, and advocate for the development of scientific advancement in the Caribbean. She was recently awarded an ICGEB Early Career Return Grant over the next three years to investigate the underlying genetics of Diabetes in the Trinidad and Tobago population. This will be the first study of its kind in this country and likely the English-speaking Caribbean, thus this study will serve as a landmark example of how genetic studies can be carried out in this country and region, and the potential for their influence on the health of the Caribbean people.

Diabetes Mellitus (DM) is a major public health concern in the Caribbean and in particular in Trinidad and Tobago. An estimated 12.5% of the population suffers from DM (World Health Organisation 2016) and without proper management, most will succumb to complications including heart attacks, strokes, amputations, blindness, and death. DM and its complications account for 14% of deaths in T&T. Diet and lifestyle play a crucial role in developing DM, and many genetic factors lead to a complex inheritance pattern of the common manifestation of Type II DM.

The unique ethnic makeup of Trinidad and Tobago provides an understudied population that is particularly prone to developing Type II Diabetes Mellitus (DM) and in which novel underlying genetic contributors to this disease may be found. Trinidadians of East Indian descent comprise one of two major ethnic subgroups of the population in Trinidad (~34 %) and are more susceptible to DM than individuals of African ancestry who make up the other major ethnic group in Trinidad. Indo-Trinidadians are largely the descendants of ~140,000 individuals brought to Trinidad by the British over the period 1845-1917 and are largely ethnically homogenous. The increased incidence of DM in this subpopulation compared to what is known in other populations indicates the possibility of founder mutations underlying this condition that may have risen to high prevalence in Trinidad.

Using state of the art genome sequencing techniques, we will begin our investigation by studying the least genetically complex subtype of DM that is caused by single gene mutations in the East Indian sub-population, the most susceptible to the disease. Monogenic forms of DM which can only be diagnosed by genetic testing, are routinely misdiagnosed as the more complex forms of DM and account for 1-5% of all Type II DM cases in the U.S.. However, routine medical diagnosis and treatment of DM cases in Trinidad and Tobago does not include genetic testing, so prevalence of monogenic forms of DM in the local population is unknown and difficult to estimate. Yet, there are significant clinical ramifications for correctly diagnosing monogenic forms of DM that can dramatically affect the lifestyle of a patient. For example, many monogenic forms of DM can be successfully managed with oral medications as opposed to more invasive daily insulin injections.

We expect this work will scratch the surface of a deeper investigation into the genetic etiology of DM in the Trinidadian population and lead to a better understanding of the genetic structure of this unique population. The results should provide an understanding of the diversity and frequency of genetic variants that underlie monogenic forms of diabetes and thus inform the design of clinical screening panels for this population as well as in other similar populations in the wider Caribbean. These finding will also be relevant to other populations in the Indian diaspora which have a similar colonial history to the Indo-Trinidadian population, such as the populations of Guyana, Suriname, and Mauritius, where DM is also a major public health issue.

The project is being carried out by her PhD student, Akili Mata. Akili, a former national scholar, holds a B.Sc. in Biology and minor in Biotechnology with first class honours from The UWI St. Augustine, and an M.Sc. in Molecular Genetics and Diagnostics with Distinction from The University of Nottingham.