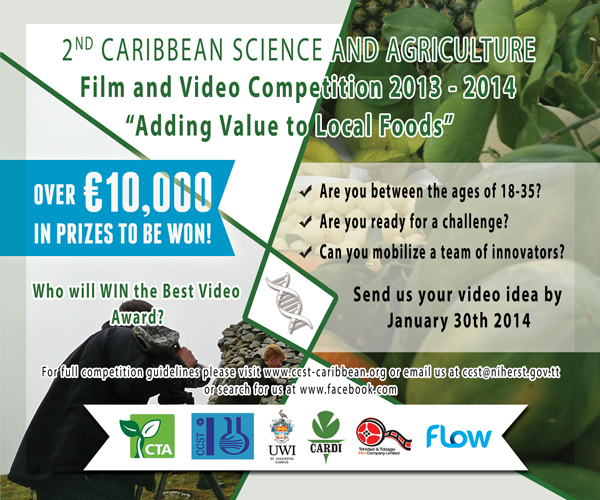 The Technical Centre for Agricultural and Rural Cooperation – ACP/EU (CTA) and partners; the Caribbean Council for Science and Technology (CCST), The Caribbean Agricultural Research and Development Institute (CARDI), The University of the West Indies (UWI), Columbus Communications Trinidad Limited (FLOW Trinidad) and the Trinidad & Tobago Film Company, are pleased to announce the winners of the second Caribbean Science and Agriculture Film and Video Competition "Adding Value to Local Foods". The Finals and AWARD ceremony were successfully staged at the Carlton Savannah Hotel, Trinidad and Tobago from 27th – 29th August 2014.

Special prizes were awarded to:

The viewer's choice was awarded to:

Over eighty (80) participants including science and film mentors were in attendance for the viewing and judging of the videos during the cross-learning workshop and finals. At the Opening ceremony on 26th August, participants were addressed by Ms. Ingrid Seeratan, Permanent Secretary, Minister of Science and Technology, Professor Pathmanathan Umaharan Director, Cocoa Research Unit, Mrs Maureen Manchouck, NIHERST President, Mr. Solomon Ioannou, Officer in Charge, Delegation of the European Union to Trinidad and Tobago, Ms Jacqueline Charles, Deputy Permanent Secretary, Ministry of Food Production, Ms. Judith Francis, Senior Programme Coordinator Science and Technology, The Technical Centre for Agricultural and Rural Cooperation ACP/EU (CTA), The Netherlands and Mr. Vincent Lewis 1st place winner of the first competition. They also stressed the need to improve the environment for science, technology and innovation to spur economic development, specifically through the transformation of the agricultural sector and by adding value to locally produced food.

The competition sought to provide an effective platform for showcasing the knowledge, talent and passion of young professionals (18-35 years) and their ability to creatively use ICTs to communicate the role of science and technology in agricultural-led economic development using the medium of film/video including animation. Thirty six videos produced by teams of farmers, scientists, communication specialists and film makers from eight countries (Barbados, Guyana, Haiti, Jamaica, St. Lucia, St. Kitts and Nevis, Suriname and Trinidad and Tobago) were evaluated. Each video was unique and highlighted key opportunities and issues in the agricultural sector (including fisheries and aquaculture) and in adding value to locally produced food for health and wealth creation in the Caribbean. The films/videos were well researched, highly entertaining, ethically sound and powerful. The judges who had the very tough decision in choosing the winners were: Ms. Desiree Sampson, chief judge - Des-Sound Production, Mr. Jason Riley - 8 Blocks to Broadway Ltd, Ms. Sandra Timothy - Tobago House of Assembly, Dr. Lisa Harrynanan - IICA and Ms. Judith Francis, reserve judge - CTA who had a casting vote in the event of a tie.

Key thematic issues related to agricultural innovation and transformation were also discussed during the three-day cross-learning workshop and finals. Several lead Caribbean experts also shared their knowledge and experience. For example, Ms Sunity Maharaj encouraged the young professionals to be fascinated by all that the Caribbean has to offer and to continue to capture and portray the beauty of the Caribbean as well as the ingenuity of the people in their stories. Young, techno-savvy entrepreneur, Mr. Christian Young Sing of Eplilmnion Aquaculture Ltd. highlighted innovations in aquaponics and the rewards of pursuing a career in agriculture and science based on applying his knowledge and training in aquaculture to establish an aquaponics business which services niche markets in the hospitality industry. The experience of this entrepreneur served as an inspiration for the other young professionals.

The winners received cash awards during the AWARD Ceremony on the evening of the 29th August. They also received their CTA trophies at the Alliance meeting during the Caribbean Week of Agriculture (CWA) which was held in Suriname from 6 – 10th October. All videos were showcased to a range of agricultural stakeholders including ministers of agriculture during the CWA.

Winners will also be supported to attend the Caribbean Tales Film Festival in Barbados in 2015, to acquire additional knowledge and skills in film making, network with key players in the international film industry and share their videos with an international audience. All the competition videos will be further edited and uploaded on various websites as well as shared with national televisions stations for wider dissemination throughout the Caribbean. CTA and partners wish to thank all those who assisted in the successful execution of this competition which was launched during the Caribbean Week of Agriculture in October 2013. CTA is funded by the European Commission.